Had a great flight from Seattle to Dallas, beautiful views the whole way. And luckily I had my camera with me.Â  It was in the overhead locker while we were flying by Mt Rainier, but I managed to convince Jay to ignore the seatbelt sign and get it down for me.Â  By chance, I got two shots of the mountain that happened to line up perfectly but were from slightly different angles.Â  A friend composed them into this awesome image that really gives you a sense of the mountain in 3-D.

(Click on the image for the large animated view.)

Marti dared me to post this link to Mominatrix, a site whose claim to fame is “banging out sex advice” from a parent’s perspective. Apparently after reproduction, a regular sex columnist won’t do… this one makes multiple references to the challenges of getting your freak despite the physical derangements of childbirth and the logistical challenges the little offspring pose. Who knew?

You’ve got to give the writer credit for linking the great democratic reboot of January 20, 2009 with a moment of mass depilation. And if you still haven’t figured out what I’m talking about… here’s another clue:

Look people — grooming doesn’t stop at the neck. There have been worse ideas than shaving down for Inauguration Day. It’s definitely change we can believe in.

And the photos from Tuesday night are just stunning, as they range from the tension of the family watching results, a few where you can just read on his face the weight of it, and then some truly stunning shots of the whole retinue on the stage in Grant Park. 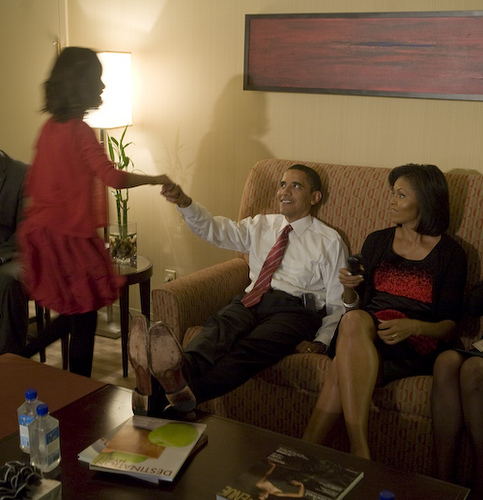 These are family pictures of both a real family and the First Family in a way I don’t believe we’ve ever had. The familiar lightly edited, un-airbrushed normalness of Flickr makes them all the more poignant. I cried all over again!

Famous and Nonfamous Strangers has existed only under the Bush regime. Our musings on the world beyond our weddings, families and feasts have been pretty bleak. And all of our ruminations on politics have gone under the banner “politics (woe is us).” It just dawned on my (thanks again, Seamus) that we can and should lift our sights. The world is still a dark place, but we hope.

Henceforth, then… just “politics” thank you. (And actually, because I’m a bit lazy, I’m just changing the category code so all those all posts will be a little happier retroactively as well.)

Let’s keep working to keep the woe at bay!

With a hat tip to Jonah, I wanted to share an amazing Seamus Heaney poem that sums up the week… both the giant victory we won, and the “Yes We Cans” of future years.

The Cure at Troy

Human beings suffer,
they torture one another,
they get hurt and get hard.
No poem or play or song
can fully right a wrong
inflicted or endured.

The innocent in gaols
beat on their bars together.
A hunger-striker’s father
stands in the graveyard dumb.
The police widow in veils
faints at the funeral home.

History says, Don’t hope
on this side of the grave.
But then, once in a lifetime
the longed for tidal wave
of justice can rise up,
and hope and history rhyme.

So hope for a great sea-change
on the far side of revenge.
Believe that a further shore
is reachable from here.
Believe in miracles
and cures and healing wells.

I tried to post this three times today but every time I read the poem again, especially that penultimate stanza, my eyes welled with tears. I was lucky enough to see Heaney in person once; the range of his deep brogue — whisper to bellow, high bell to bass — mirrors the full gamut of the human experience he catalogues in his poetry.Â  If you’ve missed his voice, seek it out.

I am truly, insanely happy that Obama was elected. An American miracle. Or, perhaps, just the latest proof of the genius authored by the Founders. Either way. There’s no way to play it down or understate it. In fact I can’t quite write about it yet because I’m still not convinced I’m not dreaming. More later I promise.

And I am thrilled (and honestly shocked, given how poorly she campaigns despite her success at governing) that Chris Gregoire is still our Governor. I couldn’t have dealt with Rossiocracy. We avoided that, and even got death with dignity. Here in Seattle we even got money for parks and our beloved Pike Place Market.

Of course, the bitter must come along with the sweet.

And I am bitter about Prop 8 in California. While we were in Palm Springs last weekend, we met several newlywed couples. To have that stripped away would be unimaginable. And now that it’s been done in California, none of our rights are safe anywhere.

Knowing that your marriage will soon cease to exist must feel pretty much like this video shows it.

I do hate to pick on the Mormons. I have LDS friends, employees and coworkers.Â  (I also know plenty of gay former Mormons — it’s hard to feel sorry for someone’s religious upbringing given my Nazarene childhood, but being a gay Mormon must take the cake.) There is a strong tradition of charity (at least for the faithful poor) in the church that I respect.

But the fact is that the Mormon church was the largest donor to the Yes on 8 campaign — apparently as part of a larger strategy to “make their bones” with Christian conservatives. (Good luck there — they are only nice about the Catholics to their faces at the anti-abortion rallies. In their churches, they talk about how sad it is you’re going to hell.)

Here’s the thing. Do not pick a fight with gay and lesbians. We have time on our hands and bear a grudge. While we’re upset that the black vote might have put 8 over the top, they get a pass. And they didn’t buy millions of dollars worth of ads demonizing us. You did. I still can’t figure out how talking about other folks’ marriages is a win for Mormons. But I digress.

We. Are. Pissed. And: You. Are. Outnumbered.

Yes, Mormons breed at a high rate and your hot little missionaries (no, really — click that link!) are peddling magic underwear all through the developing world, but miraculously we spring forth in all times and in all places — almost like God wanted it that way. When Joseph Smith had his vision, we had already been fighting repression and undermining the dominant paradigm — with style — for millennia.Â  Whether we are 10% or 5% or just 1% of the population, you will have to baptize a lot of dead Jews before there are more Mormons than queers. You have 13 million and change. We are a tolerant people and would have been happy, more than happy, to let your proselytize your way to a big happy planet of spirit babies. But you just had to go there.

To be sure — there are lots of Mormons who are terribly unhappy with the church leadership’s decision to go all in on Prop 8. And as for those Mormons who “judge not” spoke up in the media or in their congregations, or just wearing paper bags on YouTube, I salute you. And thank you. And apologize for slandering your faith. But your church has slandered me, and my family and, really, my personhood.

So… a few ideas to share about how we might show you what you get when you mess with my family:

I’m not a huge fan of Pride Parades… it’s our guaranteed five minutes airtime every year and all we get on the news at 11 is floats and leather daddies and party boys. I have always wished for a little more balance, a little more insight into our profound everyday un-fabulousness. But your support of Prop 8 shows that no matter how much we show you that all we want is the right to have a family as boring as yours, you still need to demonize us and take away our rights. It would appear we have reached the limits of assimilationism. So I say we should bring to Tabernacle Square a spectacle that would make the Castro blush for SLC Pride… I will personally don harness and chaps and wear body glitter. We can bring a parade of Dykes on Bikes a mile long. We can turn out the fetish gear, the bulls, the bears, the otters, the foot fetishists, the subs and doms, the pony boys and the dirt fags and more twinks than a Hostess factory on overtime could ever churn out. We will make the streets dark with our gayness and into the long shadows of high desert evening we will defile your Mecca. Because in taking away our rights in California, where Milk shed his blood for our freedom, you defiled ours.

That’s just for starters. When you’ve started letting your young back out on the streets, we’ll go underground on you.Â  We’ll book ourselves into your big hotels and your little B&Bs owned by bluehaired retirees and just keep on bringing the gay to the heart of Mormondom. We’ll continue for the entire month to dress up in our nicest, Republicanest clothes and walk into your temples, your restaurants and really anywhere else where you think your family is smugly secure from the world of people who wear regular underwear and don’t believe we’ll get our own personal paradise planets if we pray to the angel Moroni. We will quietly, silently invade every last inch of your reality and when you least expect it we will quietly, calmly start passing out our literature just as smilingly as your upstanding youth do on the doorsteps of the world. Everywhere you go — to your Wal-Marts and your Little League games — we will be there. Just like you have invaded our homes and our lives. Not so much civil disobedience, as civil omnipresence. Because unlike you, we are everywhere.

You have shown that you hate us for our efforts to gain respectability and stability. If you can hate a gay family’s attempts to protect itself, you must really love to hate. Being the accomodating people we are, we will bring you even more to hate — the dirtiest, raunchiest, most offensive we have to offer. And you will really, really hate it. And the more you hate, the more the world will see your faith for what it is: an idiotic cult built on misogyny, bigotry and hatred that is doomed for the dustbin of history.

But don’t worry. When your faith is gone, or dwindled to a persecuted remainer afraid to leave its inbred compounds in the desert, we gays will carry on your memory.

We will wear that sexy magic underwear of yours in our gay pride parades forever. Anything that strange will always be hot.

Those of you who went to college with me know of my undying hatred of all things a capella… but today, I make an exception. Even if I were NOT the huge Star Wars geek that I am, I would be totally impressed.

Henceforth — any day when Democrats appear poised to make history and rewrite the rules of electoral politics shall be a “Jay loves a capella day.” Because if you can’t have some extra love in your heart today… you might as well be Dick Cheney! 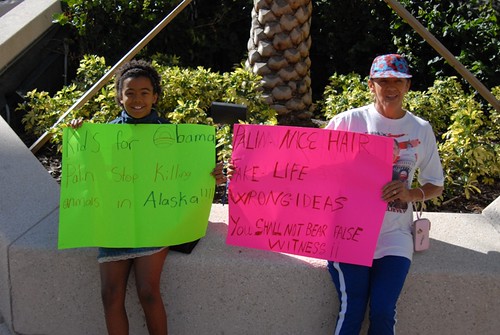 Outside the Sarah Palin rally in Tampa, Florida, last weekend.

He’s in fifth grade, and Joe Biden is his homeboy.