Once again, I use my magic deflector ray to bring you news of this cheering event.

I’ve always been fond of the library, but now, my love has no bounds. It’s brilliant. There are a few more pictures here, but really, you should just go downtown and see for yourself. Words fail me, all I can think of is this: it’s freakin’ incredible. 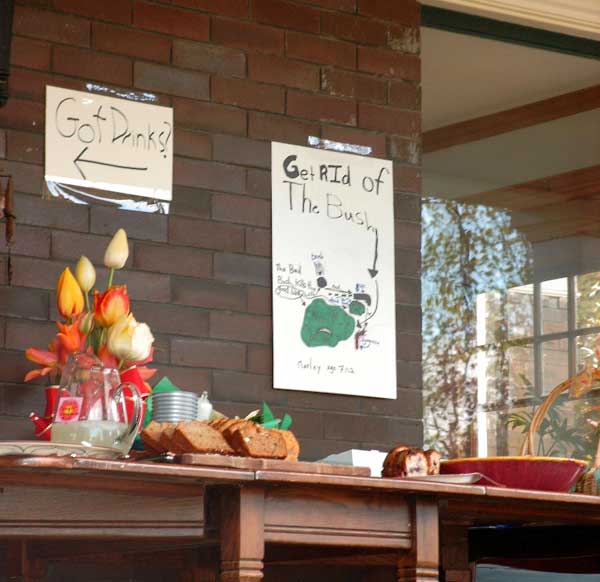 “We put away 300 dollars already, and we had to do a second shift of baking,” said our neighbor at the Half-Baked Baked Sale. “One guy gave me a check for 100 dollars. So, no, I don’t really know how much money we’ve brought in. One thing you can say for our President, he’s really brought us together.”

Here’s hoping you found good cookies in your neighborhood. We had blueberry pound cake, handmade chocolates, and a brownie to die for. Thank you Move On!

On this day in Seattle history fourteen years ago, Andrew Wood of Mother Love Bone, one of my favorite bands at the time, was found dead of a heroin overdose. Sigh. Though his death produced the great Temple of the Dog, Andy’s life might’ve produced more enjoyable music from Mother Love Bone and prevented the inception of Pearl Jam. And Andy wouldn’t be dead.

I believe that around that time, I was thinking it’d be cool if I got a Mambosok for my fairly long hair. (Actually, the product was Mambosok Headgear, I should note, since Mambosok apparently still exists and produces, now, normalish products that don’t make one look as though one is wearing boxer shorts on one’s head.) I am pleased now that this never happened and especially glad that there are no pictures of it.

Coincidentally, I’m having dinner tonight with some friends (at Lark), including a co-worker from the answering service where I worked for a few months (a step up from my post-Christmas sales job at the big old Sears store on north Aurora) and was working when I heard the news about Andy. John and I hadn’t seen each other since 1990 until a party this last weekend… though the party last weekend was a birthday party for someone I met a few months ago at another party, and that party was at John’s house—I just didn’t see the host then to realize who "John" was. (More funny coincidence: John works at/for/on seattlehistory.org.)

I am fond of sometimes remarking that "Seattle is a small town." However, I actually think that it is, merely, not overly large. If it was truly small, I would’ve continued to see John here and there—even if I didn’t want to—and the interesting (to me) fact that I’m seeing him after all these years on a day that I distinctly remember in relationship to something that I distinctly remember in relationship to John—the answering service—would be lost.

The last person I heard remark "Seattle is a small town"—quite amusingly, minutes after he had chided me for thinking of it as being as small as it turned out to be—was admitting that he had, in fact, had a date with someone on this blog. Someone I thought he should meet only because I thought they’d enjoy each other’s literate and refined tastes (and I was hoping to be there to enjoy the confluence of urbanity and intellect). When I inquired through implication whether they might’ve already met, he said, "Gary, Seattle isn’t that small." Heh. Maybe I’m just fortunate to be in a nexus of good people.

I wonder what other dots I can connect today?

We’re too logocentric here at nonfamous, and that’s really my fault. So let’s start with this nice (and reassuring, in these dangerous times) photo, courtesy of Seattle Times photog Tom Reese.

Let’s continue to post pictures (all work-safe, please)… I might ask David (or Paulette, who specializes at making technology easy to follow!) to post instructions as to how to do this. I would do it, but I bollixed up the process a couple of times before getting it right!

There’s a certain satisfaction in seeing nerd status elevated from wallflower to fashionista, but, as a genuine nerd, I take exception to the application of the term “nerdy” to “super sexy, super fun, super slutty” clothing. Anyone who’s attended a ‘They Might Be Giants” concert knows that nerd fashion is a more a byproduct of getting dressed than a focused effort to look good. Converse High Tops, the official shoe of nerds, and a Hawaiian shirt should just about cover the basics, though a preference for black is not out of the question. Anyone who’s walked the halls of our local software companies, nesting grounds for nerds of all kinds, knows that their sloppy comfort wasn’t purchased in the alt-fashion shops on Capitol Hill.

Don’t get me wrong, there’s room for nerds to be sexy. Remember Thora Birch in Ghost World? Yeah, she was hot, but her sexiness was totally compromised by an awkward quality that epitomizes nerdiness. Seymour, the record guy played by Steve Buscemi? Now that was a nerd. Thing is, the trip from nerd to sexy usually implies some sort of transformation. The sexy librarian is a prime archetype – sort of like Michelle Pfieffer’s Catwoman. Or, Lisabella in Last Tap Dance in Springfield – “she’s not plain, she’s BEAUTIFUL.” (Nerds love the Simpsons and quote it frequently.)

What these designers are pushing is not nerd chic – it’s art school style, no question. Contrived and wacky color combinations, post modern visual references to other sources, the apparent hand of the artist – and the manifestation of those things in the desire to create a visual sensation… those all the marks of art school style. Nerds live in their heads, not in their bodies, and fashion remains a mystery mostly unconsidered by nerds, except in the “Dude, she’s hot” style of deconstruction. And, unlike fashion designers, nerds read dictionaries before they start applying names to things. This fashion is anything BUT nerdy.

We nerds know you can push us down and steal our label if you really want to. Maybe we could set up your e-commerce server for free and then you’ll give us our name back. Maybe we do secretly wish we were cool and sexy like you. Then again, the co-opting of the nerd label makes us wonder if you don’t want to be like us. We probably only think that because we’re, well, nerds.

I knew those three condos on the I-5 side of Lakeview Boulevard had been abandoned for some time, but I didn’t know why until I finally noticed a couple of weeks ago that one of them was leaning quite a bit (reminding me of some of the canal houses in Amsterdam).

Here’s a little story about the buildings and what seems to be an imminent permit for demolition (which I didn’t realize one must have before knocking down one’s own property). And cheers to the person with the beautifully dangerous existence.

I can’t decide how I feel about Seattle, and if this Wired News article is any indication, I’m not alone. I still begrudge him his billion dollars worth of stadiums, but I actually think the South Lake Union plan is a good one. Though Seattle does lag behind other biotech hot-spots, the UW is emerging as a major research hub and should be throwing off a lot of private sector innovation.

Lord knows we need to diversify away from software (read: Microsoft). It’s kind of ironic that Allen might help us to do that.

While this article is about a mob in Manhattan, it really seems that uptight, over-rational Seattle could use a little of this craziness. I love the “rug to play on” line. Can you imagine something like that at the Bon?

I ask you, nonstrangers, should our blog invade the meatspace with something like this? I hate to be derivative, but if we hurry it would still be cool.