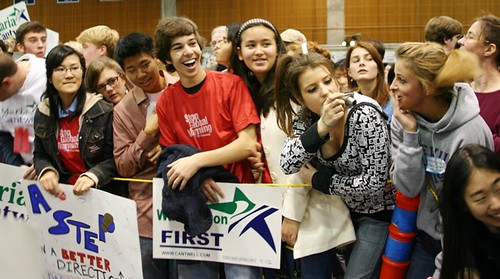 The good folks of NonFamous know as well as anyone how hard I took the last election. After logging so many hours at the campaign office, I logged a good deal more over the last two years outside the United States. I had the chance to stay, but there was no way I was going to miss this election. I’m not the activist I was last time ’round, but I’ve been hanging out at the rallies lately and I gotta tell you, it’s starting to work.

I’m on the record as being a skeptic about Maria Cantwell, but I’ve been doing my reading and drinking the kool-aid, as they say. While I’m still on the fence, I do understand the importance of Maria keeping her seat. And I understand the imperative for the Democrats to sweep the house in this election. Beaten down by the losses of 2004, I didn’t think I could find enthusiasm for 2006, but hearing Maria Cantwell, Christine Gregoire, Jim McDermott, Darcy Burner, Russ Feingold, and Barack Obama speak over the last week has really revved my engines.

It may be a passing phase and I’m sure to come down off the propaganda buzz as soon as the election is over. But for now, I’m going to take the energy of the high and remind y’all to vote and to work to get others to do so in the upcoming election. If you’re on the fence like I’ve been, I heartily suggest you get yourself to an event to hear your candidates speak. It really helps – it’s way better to hear them in person and there’s something remarkable about being in the presence of your fellow voters.

I’m not quite ready to sing the Hallelujah chorus, but I’m back to feeling like there are some good people out there who really want to affect change. Today, while watching the students at Bellevue Community College nearly exploding with enthusiasm as Barack Obama enter the gym, I thought, “Oh my god, we can’t let them down.” I survived the heartbreak of the last election, but these kids shouldn’t have to.

You know what to do.