If they are already scouring the ground for loose change to feed into vending machines how long before they steal our weapons and overthrow their human overlords?

I just think this is awesome.Â  Countering all the nonsense about the Large Hadron Collider spelling the the end of the universe, this song is both entertaining and informative:

It’s funny, I thought I was pretty clear on what my deeply formative influences were… Star Wars, evangelical Christianity, my family’s deification of Ronald Reagan and of course the profusion on male flesh on TV during the 1984 LA Olympics.

Then yesterday I clicked on a link to scans of The Usborne Book of the Future and it all came flooding back to me. I never went truly hard-core into science fiction books, but pseudo-nonfiction future-science books drilled deep into my consciousness and the Usborne series from the UK were at the top of the list.

I always loved science — up until the point when my lagging math skills meant that our misguided educational system forced me to abandon that passion. These sorts of books remained an outlet, and offered the buoying thought that it was ideas — not just equations — that invented the future. I’ve been very fortunate to be able to harness this love for ideas in my professional life, regardless of my inability to do long division or solve multivariate equations.

Back then, under the twin eschatologies of the Nazarene church and the Cold War, the future seemed so much less likely than the Second Coming or the Blinding Flash. I think these books helped me to imagine that both of those might be delayed until we got some cooler gadgets. I must admit looking back at these, that’s about all we go… we’re perilously closer to some of the dystopian imaginings of these books than the bright frontiers.

Anyway… take a look. Even for those who aren’t that interested in my formative years, it’s clear that these influenced a lot of other people — certainly including the future designers of Wired.

Though it is not nice to make fun of people with serious reality-interface problems, that is more or less our founding principle here at Famous and Nonfamous Strangers. Over the years people have shared with me lots of crazy letters, but here’s something I’ve never seen before (detailed at Ars Technica)… a hand-written petition of Federal Court seeking $5 Billion-with-a-B from Google! 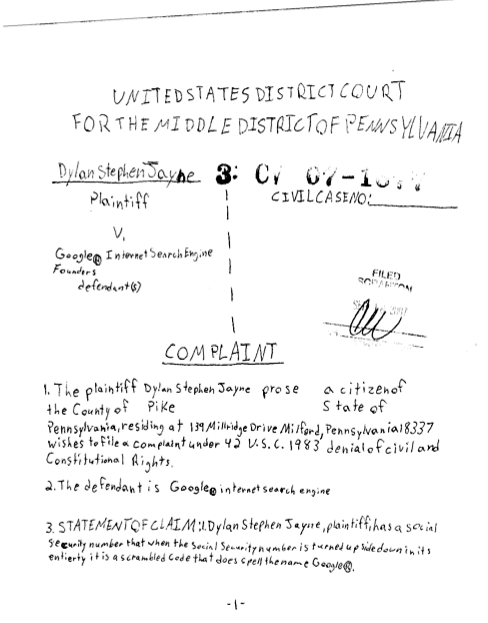 To wit, Mr. Jayne has filed suit against Google and its founders for supposed “crimes against humanity,” aiding terrorism, and putting his personal safety at risk. The Pennsylvania man filed the suit on Tuesday with a federal court, and asks for $5 billion in damages. That’s right: five billion dollars.

What’s the problem? The handwritten statement of the claim, seen by Ars Technica (online here), sums up the main charge: “I, Dylan Stephen Jayne, plaintiff, has [sic] a social security number that when the social security number is turned upside down in its entirety it is a scrambled code that does spell the name GoogleÂ®.”

Apparently he’s upset (something of an understatement) that details of an arrest on public drunkenness and resisting arrest are searchable on the site. And that has led him to a number of other rather more nefarious conclusions. Of course now if you search for “Dylan Jayne,” you get piles of posts poking fun at him. That’s just the way the world works now–the village idiot now has a global (“blogal?”) village to call home. And from the image above, we all have his home address! That’s something these crazy rants, letters and legal filings have in common — the paranoid individual always manages to disclose much more personal information than they should, to the effect that lots of strangers really DO know where they live. Perhaps it’s a kind of wish fulfillment. (Consider it entirely fulfilled here!)

What worries me is not his particularly conspiracy theory, but the danger that this particular brand of mental illness might spread — if we all went nuts over the embarrassing tidbits that search engines index, we’d all be well and truly around the bend. You might hold out hope that God will forgive you, but you must always remember that Google never forgets.

Here’s how you would explain quantum physics to a dog. Sadly, as smart as Max and Easy are, I doubt they’d accept decoherence between the branches of the wavefunction as a suitable explanation for a lack of treats. And what good is Quantum Physics when it can’t explain why they always go chasing after squirrels in the wrong direction?

From a scientific perspective, this is cool. But check out the last 30 seconds for the future in laser-lit fountains in NY corporate lobbies.

For you puzzle fans, here’s something fresh: a 3-D building puzzle from MathsNet Interactive Geometry. It’s not too clear from the interface, so here are some instructions:

It’s very tricky to start out with, but there’s a trick you need to figure out that makes it much easier. If you’re stuck, the trick is after the fold. Enjoy.

END_OF_DOCUMENT_TOKEN_TO_BE_REPLACED

TiSP for Enterprise
We’re actively developing a higher-performance version of TiSP specifically tailored to small and medium-sized businesses, including 24-hour, on-site technical support in the event of backup problems, brownouts and data wipes.

This above factoid become increasingly funnier when you realize that the fibre optics run through the sewer and out your toilet. The age old standard of magazine reading material will be replaced by a WiFi capable device in the very near future. Feel free to visit the Google TiSP group to discuss your backup or wipe problems with others that may have similar problems.

PS> Interestingly enough, Rich Miller points out that sewer delivered fibre optics were actually implemented in Indianapolis and the ‘Burq in 2001.

Still, a very impressive effort, documented in detail here. Wii Bowling is a frustratingly realistic game — it picks up my natural (and unintendended) left spin with such accuracy that I have difficulty breaking 200 in the game. It’s impressive that the robot is consistent enough to strike every time. It’s also impressive that Wii Sports still picks up a bit of natural variation — each strike has slightly different pin action.

I remain impressed by the sensitivity of the Wii Remote. I just got Tiger Woods golf, it’s an amazing game. I have a nasty hook with almost every stroke, and it’s easy to pin that on a fault with the game. But I’m confident it’s just my lack of skill. (I suck even more at real golf.) I’m confident a robot like this would be consistent enough to challenge Tiger in the game’s final championship.

Here’s a wonderful image of all (known) bodies in the solar system larger than 200 miles in diameter. I love this picture not just because I’m a space nut, but also because ever since I started reading Tufte I’ve been fascinated by how simple organization — in this case, ordering the planets, moons, and asteroids by size and lining them up — can bring meaning and understanding out of what would otherwise be an arbitrary collection of facts. I’ve seen many attempts to illustrate how much bigger the Sun is than the planets before — here’s another great, but humbling example — but by narrowing the focus to just bodies in the solar system Alan Taylor gives a great sense in the variety and distribution of sizes of objects. The Earth no longer seems so insignificant!