If you think you don’t want to see a play about semi-pro wrestling, one that has an overtly homoerotic subplot, well, to my stunned surprise, you’re wrong.

Last night I was lucky enough to catch Piledriver at the Cap Hill Arts Center. I found it wildly entertaining. Oh, sure, it’s obscene. It’s rife with profanity. It openly represents and explicity discusses gay sex. And there’s a whole lotta body slammin’ going on – after all, it’s about semi-pro wrestling. But tangled in all the showy head banging and theatrical bouncing off the ropes, there’s a good story, rich character development, and loads of laugh out loud humor.

The unlikely hero of the show is the writer. Harvey is a lumpy, aging, ex drag queen with crazy hair who sets up all the story lines around each night’s show. My friend K – who invited me to tag along – is an editor and writer and the two of us cheered like crazy when ever they made writing gags. (I didn’t mention the whole audience particpation thing.) Something that had us both hysterical? A scene where the wrestlers are arguing about the plot line. Harvey interupts with something like:

You don’t like the plot line? You don’t like where things are going? Well, F**K YOU! It’s my show. I’m the writer and you’ll follow the story EXACTLY THE WAY I TELL YOU TO.

Close enough.We were also big fans of this classic bit of ridiculous snark:

Do I look smaller to you? That’s because I’m WALKING AWAY!

The play is funny, raunchy, well staged, well acted, engaging, and, simply, a really good time. But hurry up, it’s only on for two more nights at CHAC. Get tix here.

As David foreshadowed a few days ago, we made the pages of the Seattle PI today. Susan Paynter is wonderful. We got connected with her earlier this week through our friends at the Pride Foundation and talked to her on Tuesday, before we knew how the State Supreme Court case would turn out. Oh well…

For posterity’s sake, my family “turned on a dime” the minute I came out–they didn’t wait for the wedding. But I know it did make a big difference to them.

As disappointed as I am about the court’s decision, I do believe that the best long-term approach is to go through the legislative process. Had we won, we would have spent the next five years in a defensive position trying to keep the Rethuglicans in Olympia and Tim Eyman from defeating us again–not to mention reinvigorating backers of efforts to write a marriage ban into the US Constitution. Much better, in my view, to set to work building support for a future legislative shift.

Demographics are on our side–people under 30 support our right to marry. As MLK said, “The arc of the moral universe is long, but it bends toward justice.” Our time will come. And on that day when David and I can make our marriage official in Washington, we’ll throw one hell of a party! 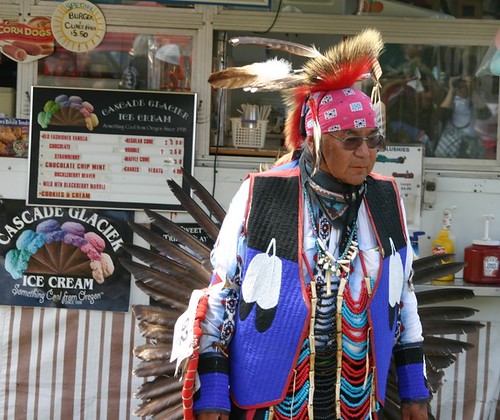 We stumbled across the carnival accidentally – we could see it from the ferry when we came back from Lummi and figured we might as well check it out. The women at the gate told us there was “lots going on, lots of it!” They weren’t kidding. We arrived just in time for the Grand Entry to the Pow Wow.

It’s been a good long time since I’ve been to a Pow Wow. I’m never sure what the correct ettiquitte is around these events – it feels a little bit like crashing a wedding. But we were hungry and everyone was welcoming, so we had salmon and I took pictures. It was a visual feast. (And candidly, I feel like showing off a little, I can’t believe I got these pictures myself.)

A few years back I was working in the Eastlake neighborhood. I walked to work almost every day, down the stairclimb, across the treacherous I-5 onramp, and down the hill to the office. One morning at the top of the stairclimb I noticed a flyer – an Eastlake neighbor was looking for help getting funding for transforming the blackberry and beer infested patch of dirt underneath the freeway in to a park. (Sorry for that bad sentence. I’m trying to unravel it.)

I signed up to help. I posted petitions, gathered signatures, attended a few city meeetings, wrote a truckload of letters to the cityâ€¦ once, I was on the evening news – with my bicycle – talking about how bike and pedestrian unfriendly the crossing was and how great it would be if the Eastlake and Cap Hill neighborhoods, divided by I-5, could be connected again.

Today when I got home from yoga, there was a message on my machine from Chris, that Eastlake neighbor, asking me if I could attend the opening of the park this weekend. He said he really appreciated my work and wanted to introduce me at the festivities! I was touched and honored by that, though Iâ€™m not really sure I deserve any recognition. Writing down what I did, maybe it was significant, but it didnâ€™t feel like much at all. Still, itâ€™s a very sweet success! Where once were fences and candy wrappers, there’s now a park with bike trails! It’s just like that Talking Heads song! “This was a parking lot, now it’s a peaceful oasis!”

If youâ€™re in Seattle this weekend, buzz by Colonnade Park and take a look. I helped make that happen! I couldnâ€™t be more proud.

About a week ago, I got new tabs for my car. I didn’t really look at the sticker when it arrived in the mail. Today I went out to put the new sticky on my plate . Guess what the image is on the current issue of registration stickers? A monorail.

…but I know what I like. And I like Black Box Opera Theater. They’re just getting off the ground as an ensemble, but they’re all pros. Last time, all the hair stood up on my arms and I broke out in goosebumps when their tenor sang; it was that incredible. I finally GOT it. “Oh! THIS is why people like opera! OH!”

The company is having another open house, this time at the Columbia City Theatre. I have’t been down there yet, but it’s supposed to be a remarkable old place. The recital is Sunday the 16th, 2-4, but come at 1:30 for a bite to eat. There’s more information here.

Disclaimer: Carolyn, the mezzo-soprana, is a good friend of mine. In spite of the fact that I’m an opera philistine, she still invites me to her events.

So as I mentioned before, I’m playing at Bumbershoot. I wanted to find out if our group had to go through any great fiery hoops to become an “approved” Red Cross fundraiser. Turns out it’s REALLY easy. Contact the Seattle Red Cross and they’ll send you the paperwork. Essentially, it gives you a legitimate contract so you can carry around a bucket or water bottle or whatever and gather funds for the Red Cross. You can donate directly, but if you’ve got the opportunity to shake others down for a little spare change, this is a good way to do so.

If the Red Cross isn’t the disaster relief agency of your choice, I’m sure you can find similar support from the folks you’d like to raise funds for.

You might be going, you might not, right? It’s too crowded, it’s too expensive, you can’t be bothered. I know, I know. But if you’re sitting on the fence, thinking you MIGHT go if only there was that one killer act, well, let me help you make up your mind. You know who’s playing at Bumbershoot this year? ME. Yup, that’s right.

Okay, okay, I’m not solo, I’m just part of the back up for the Polynesian extravaganza that’s happening on the newly added Volcano Stage. We have two short sets: Sunday, September 4, 7:00-7:45p and 8:30-9:15p – Volcano Stage (International Fountain) at the Seattle Center.

Stop by for one of them. I’ll be the one with the ukulele and the Hawaiian shirt. It would make me ever so happy to see your smiling face in the audience. Come see us before you go see Elvis Costello, k?

Does anybody else who works with/for/at Microsoft think that this doesn’t necessarily bode well for the workers? Or is that just paranoia, which we’re supposed to be trying to keep at the lowest level?

As a former “I don’t need no car” bicycle commuter, I applaud the aesthetically pleasing work that Ghost Cycle is doing. If you’ve ever run afoul of a car on your bike, you know how freaky scary it can be. My current 10 foot commute doesn’t make sense to do by bicycle, nor does the haul across the 520, but it’s good to know that folks are working on the behalf of our two-wheeled friends. Here’s a little press on them, too.