Skeptomai has fun news today… inspecting a laptop bag he bought from a Seattle-based laptop-bag boutique (yeah, I know, only in Seattle) to find out if it was washable, he found out something else. The French translation had an “Easter egg” hidden after the actual care instructions… translated, it reveals “We are sorry that our President is an idiot. We didn’t vote for him.”

This is a smart and funny stealth version of the sentiment on the American Apology tee we profiled earlier and noted in use here.

Oh, and the bags are really cool too… I think my birthday money might be burning a hole in my pocket! 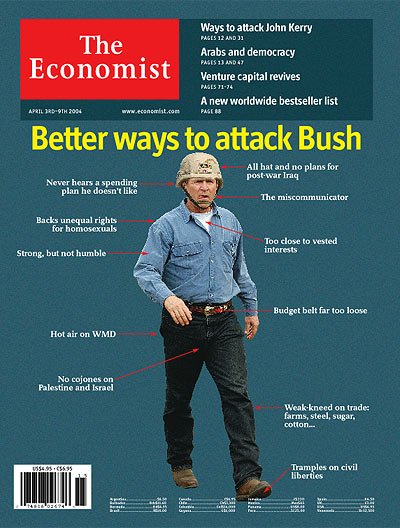 It’s my birthday, so I’m going to make as much fun of W today as I feel like with no apologies. Remember, The Economist is center-right… so this is hardly some left-wing British rag savaging Bush. The article is just as scathing but not quite so much fun.

W wants the reflected glory of being a “war president” with none of the reflected gore. He seldom mentions the war dead, let alone attend a funeral or the homecoming of a casket. (He’s probably too busy not reading the papers.) But with the miracle of Photoshop, and with apologies to Chuck Close, you can see the real picture of W as a war president. (Thanks Ray!)

Holy marionberry crumb cake. Rumsfeld! If your top deputies leave sensitive anti-Clarke talking points behind after a visit to Starbucks, how can we trust the secrecy of your crack military plans?! Boing Boing: Memos in Starbucks detail Bushies’ Richard Clarke strategy

Blogger “retrogrouch” of the interesting Texas-based blog Barefoot and Naked has dug up a lot of good info (mostly from international papers) in the wake of Richard Clarke’s testimony. Amond the most interesting is clear proof that Condoleezza Rice and Ari Fleischer clearly lied about the administration’s lack of intelligence about commercial planes being used as weapons. Just a few months before 9/11, Bush slept on an aircraft carrier off the coast of Genoa during a trade summit there, because of a specific and apparently credible threat about commercial plans being crashed into buildings there. If the adminsitration couldn’t imagine the same tactic being used on US targets, their lack of imagination is terrifying indeed. Retrogrouch also makes good points about Bush’s “swatting at flies” comment (that’s what the war on terror will feel like as we strike at distributed, independent targets) and the anger of US troops tracking Bin Laden when they were pulled off a hot trail to chase Saddam.

Basically, retrogrouch pulled together several strands that had become apparent to me in the Administration’s meltdown over Clarke’s testimony. For me, the net is that the Bush team just doesn’t understand the painful realities of the rise of non-state actors. Of course it would be easier if terrorists were propped up by states, because those states have “good targets” that can be attacked. Wolfowitz, Rumsfeld and others talked of attacking Iraq as “draining the swamp,” i.e., shutting down a terrorist breeding ground. But not only was Iraq not a breeding ground before the war, it is now because of there actions–actions that have mucked up the entire Middle East to the extent that it’s a far swampier swamp than it was 18 months ago. Now with the escalation of the Israel-Palestine conflict, the entire Muslim world believes the US is out to get them–and from their standpoint, that is probably a reasonable belief.

I have to end this with a crass bit of wisdom that would not have been news to my Grandaddy on his farm: if you don’t want flies, stop spreading bullshit around. Given the daily load this administration is dishing out all over the world, we’ll all be swatting at flies for a long time.

If you did not see John Stewart talking about the 9/11 commission last week, these clips are an absolute must.

Or at least, a not-so bad tool for hitting some good targets.

Sibel Edmonds was a contract translator for the FBI, translating previously untranslated intelligence that suddenly seemed important after 9/11. She made the mistake of pointing out that a coworker might well have been associated with one of the very groups under investigation. Instead of getting a medal, she got in a whole heap of trouble, ranging from losing her job to getting death threats against her family. 60 Minutes aired a damning interview with her last summer, but it failed to become a major news story. That’s right, that damn liberal media always out to get the Bush administration–neglecting a story orders of magnitude more important than Filegate.

Now for something really shocking– an optimistic post about politics! Even better, a whole category for posts suggesting that W might just be following in his daddy’s single-term footsteps.

Whence the name? Rummy, of course. One of Richard Clarke’s great revelations was that Rumsfeld, in the days after 9/11, argued for attacking Iraq instead of Afghanistan, saying “there aren’t any good targets in Afghanistan and there are lots of good targets in Iraq.” The foreign press have had a lot of fun with that one. (France, presumably, has a lot of good target, too–luckily, this was before they were pissed off at the French.)

Anyway, Clarke’s testimony felt like a real “have you no sense of decency?” moment, when the immediacy of televised hearings actually broke through the clutter and made certain things clear. I do not believe the administration can survive by spinning this away, or by asassinating Clarke’s character. His apology to the American people felt like a dam breaking with the force needed to wash away all the blame-gaming and cover-ups we’re endured since Bush won, er, was inaugurated.

So I hereby declare open season on the Good Targets in the Bush Administration. If you notice sleazy spin, disinformation, or Big Lies, put ’em here. We’ll all feel better, and raising everyone’s awareness about just how dishonest they are will only help us convince people how important it is to get W & Co. out of office in November.