But really, how can you not be just a little bit tickled by the realization that almost everything is even funnier when said in Latin. For example:

Which means: You have a big piece of spinach in your teeth.

Which is to say: Garbage in, garbage out.

On the other hand, somethings are amusing in Latin, and just even funnier translated back to English.

For the first time, every page of every issue of America’s leading magazineâ€”from full-color covers to spot drawings, from poetry to Profiles, from cartoons to advertisementsâ€”on reader friendly and highly searchable DVDs.

The Complete New Yorker covers The New Yorker’s entire history, from February 1925 to February 2005, the magazine’s 80th anniversary, providing a detailed yet panoramic history of the life of the city, the nation, and the world during the most exciting and astounding decades any society has ever known.

My old friend Trav (I guess I should say D. Travers Scott to convey the authorial gravitas) has a new book coming out. If One Of These Things is Not Like the Other is anything like his previous book, Execution, Texas 1987, it will be dark, sexy, and erudite.

His publisher describes it thusly:

One of These Things deals with similar themes as Execution — family, masculinity, identity, faith — but in a more fantastical narrative. An alternate timeline whose technological advancements are just out of step with our own.

A set of quadruplet brothers are raised in rural isolation by their older, but also identical, father. All share the same name.

Now in their 20s, the sons are shocked by their father’s unexpected suicide — and his claim that one of the brothers is not their brother. He is not family. He is an unrelated outsider.

From different corners of the U.S. they converge on Gravesend, NJ, to meet the woman who may have answers. Maybe more answers than the men want.

Actually, Scott calls it his “twisted take on Hemingway’s The Sun Also Rises: a satire on American Manifest Destiny and the cult of masculine individualism, disguised as a thriller.”

So color me intrigued! There is more info on the book here, and Trav is also blogging the whole process of promoting it.

Trav has a few readings coming up in Seattle as part of a fairly substantial book tour. We will be hitting the Bailey Coy reading but catch whichever you can. You won’t regret it!

If you can’t get your art exhibited in prestigious art museums, why not just hang it there yourself? That’s what Banksy did. (Banksy has been featured here before.) 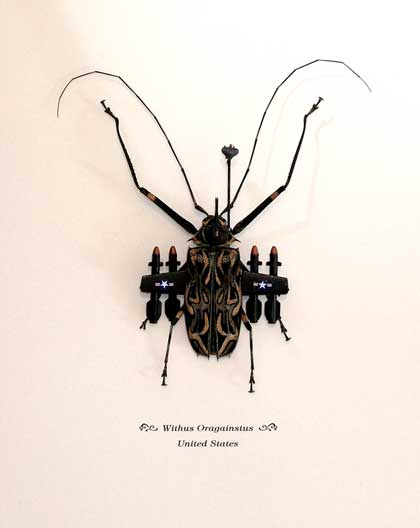 My heart is bleeding right now. This has to be the blackest day since Tom Ford left Gucci….how will I go on…aaahhh the pain, the pain.

You’ve been wondering how much of Homeland Security’s energy is spent on art criticism, haven’t you?

You can get a State of Sabotage passport online for 35 dollars here.

Well today is the day where, traditionally, we spread the love of VD!

This is oddly compelling.

Into The Storm is hard to describe, but really good–part fashion mag, part cultural criticism… check it out.