James Connaughton’s job title is Chairman of the White House Council on Environmental Quality but he states publicly that our government will “continue their partnership with the oil and gas sector” while working only with environmental organizations who are “constructive” in terms of “prioritizing domestic production.”

I don’t know if I’m disgusted at the blatant misuse of power slash violation to our environment by those entrusted to protect it or actually relieved that at least they’re finally being upfront with their objectives; which are the same as Chevron’s and the opposite of the Sierra Club’s.

Joe Blundo of The Columbus Dispatch recently filed this report about liberals flooding north. I got this sent to me on the Seattle Burning Man mailing list; in looking for a web source for the story, I found this posted several places. You might want to pick one of these links to read it, unless you already have an account on the Dispatch‘s web site.

”I feel sorry for American liberals, but the Canadian economy just can’t support them,” an Ottawa resident said. ”How many art-history majors does one country need?”

Tomorrow is Thanksgiving – that means it’s just about time for my annual retreat to Old Europe. Going to Europe feels somehow more significant now, as I arrive with a resident’s visa and I have actually been looking for work there, though more with a sense of capitulation then of adventure. (Before you jump on me for abandoning ship, know that anything I decide to do regarding living in Europe also means being back in time to get residency in a swing state in 2008. At least, that’s the current plan).

Anyhow, as I gather the things I need to pack, I’ve been thinking about what I have to be thankful for that has an American flavor, about things that carry some essence of Americana. Globalization means that you can buy pretty much all the same stuff everywhere, especially if it’s just Europe you’re headed to, so I don’t think so much anymore about how I wish I could get, oh, I dunno, peanut butter. But there are other, sometimes ethereal, American things that I’m thankful for. So in addition to the usual “friends, family, and good health,” here’s a handful of American induced miscellanea for which I am grateful.

1. Al Gore’s World Wide Interweb. Oh my god, I honestly can’t imagine how we got by before the Internet. After all, it’s the web that connected me with you, the nonfamousi! The web keeps my long distance phone bills down when the husband and I are on opposite sides of the Atlantic – hooray for teleconferencing – and keeps me connected with all my friends when I’m snowbound in Austria.

2. Multiculturalism. I’ve got friends of all religions, plus, is there anywhere else in the world where you can have huevos rancheros for breakfast, cous cous for lunch, and pad thai for dinner?

3. Road Trips. I was driving around in my car the other day listening to dinosaur rock and Tom Petty was singing “She was – an American girl…” Then I started thinking about one of my favorite Bowie tracks ever, Young American. Then I started thinking about driving in places where you only get old rock and roll, country western, or Jesus on the radio. I’ve done lots of traveling, but there’s something about hearing “Stuck in Lodi Again” while you’re driving south from Blackfoot with the Rockies on your right….

4. Levis. Yeah, they’re not even made in the US anymore, but they always fit, they last forever, and maybe they go in and out of style, but they’re the most comfortable jeans on the market.

5. “I can do that.” American mentality is just busting with possibility. Europeans I know are always inventing these elaborate schemes around how they’ll get all these necessary people involved with the correct licenses and paperwork and then, they’ll skim off the top while others do the work, and they’ll be rich, rich I tellya! Americans just don’t seem to think that way. They want to start a business? They start a business. They’re not bogged down in credentials and systems. They have an inventiveness of spirit that you rarely encounter in Old Europe. Freelancers, contractors, the free agents you see at Victrola and 11 am on a weekday? Virtually unheard of in my other home.

Another surprising thing I found is that in spite of my heartbreak, it wasn’t that hard to come up with American things I’m thankful for. Yet another reason to be thankful on the holiday. Enjoy the holiday. And thanks.

Just the other day I suggested that the fine women of Illinois might want to start stowing away those contraceptives in anticipation of the encroaching theocracy. Now it seems the “fairer sex” in Texas and Louisiana might also ponder following the newly issued Bunker Stocking List, 2004 Version.

But his proposal would not exempt druggists from going to battle — it would let them refuse to fill prescriptions that go against their moral principles.

Corte, a seven-term Republican state representative from San Antonio, has pre-filed a bill for the coming legislative session that would amend an existing law that allows doctors, nurses and hospital staffers to opt out of performing abortions.

The bill specifically refers to prescriptions for the so-called “morning-after” pill, but Corte acknowledges its language could be interpreted to include any prescription contraceptive.

And in Louisiana: After Idalia and Jose Moran’s son was born by C-section, Idalia Moran’s doctor advised her not to get pregnant again for two to three years, and prescribed the pill.

But as CBS News correspondent Byron Pitts reports, when she went to the pharmacy, the cashier said, “You know what? I cannot refill them because the pharmacist says it’s against his religion because it’s abortion.”

Birth control fits nicely on the shelf next to your books by Darwin and that tear-smudged copy of the US Constitution.

By the way, The Handmaid’s Tale makes great bunker reading.

With thanks to Colin Purrington.

What you see is what you get: a world leader who was too busy making shooting gestures to himself in the bathroom mirror to notice his fly was open. Nice shot George. 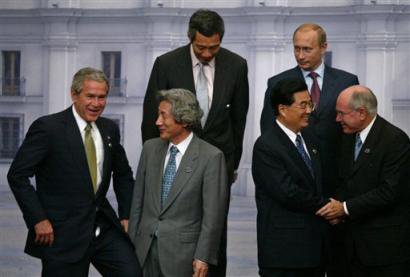 I’m pretty sure I learned in grade school civics that a Senator is elected to serve the people. I’m pretty sure I learned that the government was broken up in to three branches for checks and balances so no one wing would have to much power, too. But this all kinda flies in the face of what I read on Slate this morning about Arlen Specter and his loyalty oath.

Here’s Dahlia’s concise yet terrifying spin: “In order to claim the chairmanship of the Judiciary Committee, Arlen Specter was forced to abandon future personal or independent judgment—the very judgment the people of Pennsylvania elected him to exercise. He has pledged—in advance of knowing who they are—to endorse the president’s judicial nominees and to vote for a highly controversial GOP rule change to end filibusters and effectively terminate dissent of any sort in the Senate.”

The position Specter sought to hold has been completely declawed by the actions he took to ensure he would hold that seat. Does Specter need a gentle reminder that he was elected to represent the PEOPLE, not the President? Arlen, you’ve gone from John McCain to Colin Powell with the flick of a wrist. Stand by for the Power Point presentation.

Agenda Inc. has a story that I can barely categorize, much less comment on:

A home makeover-style TV programme in Iraq that offers needy families the opportunity to have their war-damaged homes re-built from scratch has become a massive hit. Labour And Materials, broadcast on Iraqi satellite channel Al Sharqiya, does not merely redecorate a room, but reconstructs entire properties destroyed in the ongoing conflict in the country.

am I the only one who has been targeted by the God Squad SPAM specialists? I have received a number of the following emails – the text is all the same – from people trying to save my eternal soul:
END_OF_DOCUMENT_TOKEN_TO_BE_REPLACED

I never imagined how successful–or how much fun–this blog would be when I sat in my bedroom on 61st Street struggling with HTML and CSS getting it going. And needless to say, I had no idea all of the amazing changes in my life I’d end up writing about–proposing to David in Maui, buying a home we’d call Casa Nonfamous, visiting Moscow, Paris, London, Sydney and Adelaide, Vienna, and Florence with him–let alone the immeasurable joy of getting married in Vancouver. I could only imagine the pleasures of reading Paulette’s posts from Spain. Swallow Don’t Spit wasn’t even a glimmer in my (slightly intoxicated) eye.

There was no Pam in our lives, no Jamie and Mike, no Jason–can you imagine? We’d never loved, worried about, or mourned poor little Dozer. I never dreamed that a post would get David profiled and photographed in the New York Times. And who can forget the time I lost on Jeopardy! While I did expect we’d all have quite a bit to say about politics, I did not really expect the quality of writing and depth of commitment the site would bear witness to. Needless to say I never really imagined that 51% of Americans would turn the site into an extended exercise in group therapy/platoon activation. But I did hope that it would reflect, as fully as pixels can, the passion that all of us bring to the business of living, loving, eating, drinking, traveling, working, and politicking. That it has done, and I am so proud and thankful.

So what are our vital statistics? With almost 1,000 entries, we’re humming along quite nicely. Our most recent author additions–Terry, Marti, Jamie, Jason, and Erik–continue to post amazing stuff, joining David, Paulette, Pam, Gary, and me. (Nonfamous, for its birthday, really wants to get Anika and Julie Anne posting, not to mention Rachel if only she could conquer her fear of the Internets.) These writers are being read by 300-500 unique visitors a day, and our Google AdSense revenue is trickling in at a rate that pays for the site’s hosting. But most importantly, we have proved that a group blog can do exactly what I hoped it would–replicate online the amazing sense of community, conversation, and convivality that our group of friends demonstrates in the flesh. Our family and friends in Australia, Oklahoma, New Jersey, New York, England, and Poland can see what’s happening in Seattle and hear the thoughts in our heads. We get the occasional reader from Finland, Japan, and even Saudi Arabia. It is an amazing thing, and I want to thank every person who posts to, comments on, or just reads this site.

So what of the next two years? I honestly believe that the quality of writing and commentary we offer is as good or better than sites that are read by thousands, or tens of thousands, of readers every day. While I don’t mind staying, well, nonfamous… I think we can take it to the next level. Blog strategy is increasingly part of my business–helping companies use blogs to connect to their best customers and most honest critics–so I’m going to be talking to more of those “A-list” bloggers and raising the profile of nonfamous.com in the blogosphere. I’m happy to stay nonfamous… but I really do want to launch Paulette’s cooking-show career. More on that later.

But to sum up, thanks for reading, thanks for posting, and thanks for passing our link around. Thanks for keeping paranoia at the lowest healthy level, however high that may be. I think Jeannine would be proud (though still crazy).